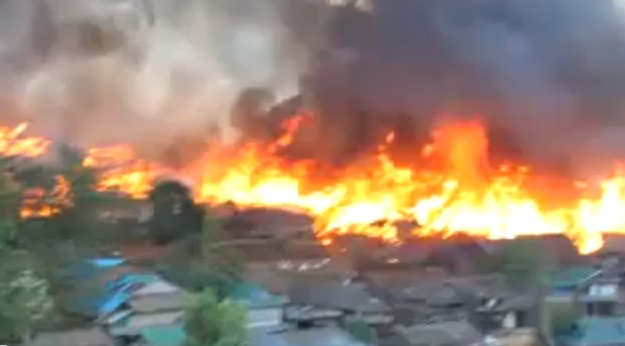 Yesterday, February 23, 2012 at around noon time a fire broke out in Umpiem Mai refugee camp leaving over 4000 people homeless. Umpiem Mai camp is 80 km south of Mae Sod under Umphang District, Tak Province. Umpiem Mai is one of the 9 refugee camps on the Thai-Burma border which houses over 17,500 refugees . During this time everything is very dry and houses made of bamboo and thatch leaves are built very close to each other allowing the fire to spread quickly. Initial reports accounted over 1000 houses being affected (566 houses burnt down to the ground and 515 houses dismantled to stop fire from spreading) and two children missing. As the fire mainly affected the muslim area, there is a high need for halal food support.

A coordinated response among CCSDPT (Coordination Committee for the Services of Displaced Persons in Thailand) agencies working in Umpiem Mai immediately started yesterday afternoon and a Situation Report was issued describing some of the immediate actions taken. A wider coordination meeting was held this morning in the camp which included NGOs, UNHCR, Camp Commander and Camp Leaders at which more consistent information was shared and Sector Leads were identified.

We will be working together with our partners, the CCSDPT and KWO (Karen Women’s Organization) to extend help to women and children affected, focusing on women and children’s needs, including providing baby kits, hygiene supplies for women and girls, sarong, to mention a few.